The kids look forward to Halloween every year. They get to dress up, play with their friends and collect a whole bucket full of sweets to last them a looong time. Every year, they go around the condo with their neighbours knocking on doors shouting “Trick or treat!” At the end of the night, we usually gather around the dining table to swap sweets and stories. They would share with each other which were the best houses to go to with the nicest sweets, and would comment on the elaborate decorations on the doors of some houses or the scariest outfits some people donned. I still remember the funny stories they shared. There was one lady who gave them sugar instead of sweets. Oh, and this story cracked all of us up. #1 came back with an apple in her bucket. An old lady opened her door and they tried to ask her if she had any sweets in Mandarin which was “tang guo” but the poor old lady heard it as “ping guo” and thought they were in need of an apple. As it turned out, the refreshing apple was the most cherished item in the bucket at the end of the long, humid night.

This year, #2, #3 and #4 invited their classmates to join them. I instructed #4’s friends to hop on her school bus and pay the auntie their single fare for a ride back. But they called me during recess telling me that they didn’t dare to do so as the auntie is very ‘fierce’ and they pleaded with me to pick them up. I relented but told them they had to wait for 20 minutes as I had to pick #5 up from his school first. They spent their time at the library while waiting for me.

My kids know they need to have a nap if they wanted to stay up late as they have to wake up at 5+/6+ for school tomorrow. I asked their friends to have a nap together with them but they said they were used to sleeping late. I got #2 to make sure that #4 and #5 had their naps while I went off to pick #3 and her friend. While the kids had their 1 hour nap, their friends played with Kate. I must say they did a really good job looking after her. Well done, girls 🙂

Our stash of hats and buckets… A few weeks ago, my neighbour saw that I had so many kids and I guess they concluded that I was the best person to donate all their unused Halloween hats to. So we had plenty to go around. #2 invited 5 of her friends over and they had fun dressing up and putting on dark eye make-up for each other. 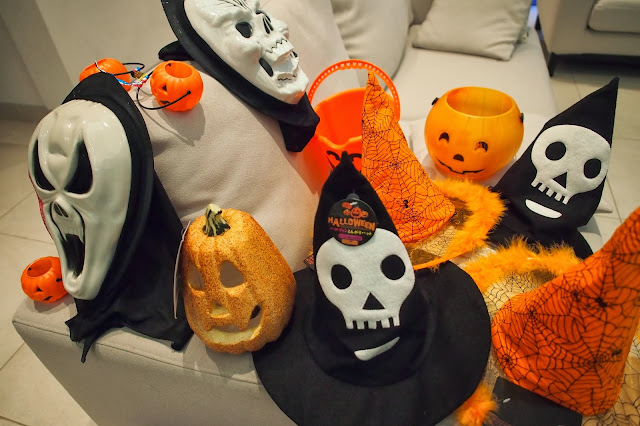 My sister-in-law and my hub decided to have a simple BBQ for the kids. There were so many of them it felt like a party. They rustled up an assortment of chicken wings, rack of lamb, pork chop, corn on the cob and sweet potato for the troop. My SIL also made the kids’ favourite truffle oil spaghetti. 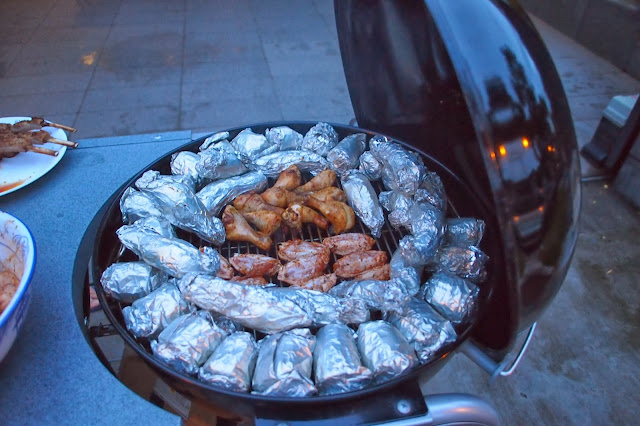 They all ate their fill before heading off. They had decided to go back to our old condo as we hardly saw any Halloween decorations on any of the houses in our estate. Besides, it was a good opportunity for them to play with their old friends. 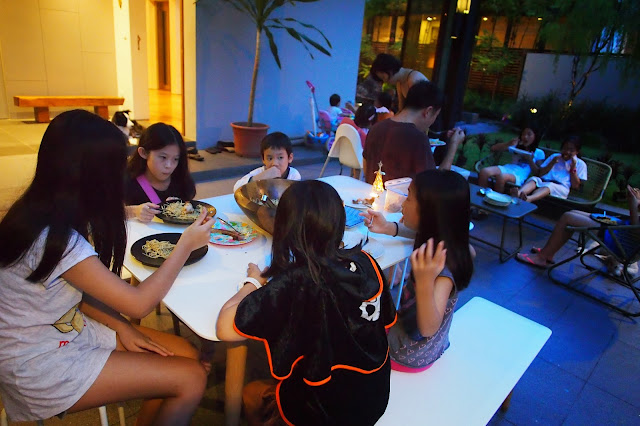 All set to go trick or treating!

Sane tip: I love when the kids mingle around and the older ones help the younger ones. It’s a great ecosystem & best part is, I’m left out of it! I dropped them off at the condo and they took care of one another. #3’s friend tore her shoes in the process and #2’s friend was resourceful enough to use some string she found amongst the sweets to tie it together. And it worked.

Save tip: Costs nothing but everyone had a bucketload of fun! Hmm, I need more occasions for the kids to bond like this. Christmas? New year? Perhaps we can start our own traditions. Put little trinkets or handmade gifts in a huge basket at our door and all the neighbourhood kids can walk around, exchange little gifts and get to know one another.