With 6 kids, this is how we house them. The 4 older girls share 2 rooms, and #5 has his own ‘lair’, as he likes to call it. During the school holidays, he ties bedsheets all around the room and turns it into his ‘fort’.

Kate is too young to need (or deserve) her own room, but #5 very generously shares his space with her. Anyway, he was so used to sleeping with us in our old place that he doesn’t quite dare to sleep by himself. So now, it serves as a play room for the both of them.

His study table was passed down from #3 when we moved, but he hardly uses it as he does his homework downstairs in the living room. These space-saving study tables were very useful for us previously as it allowed every child their own little station to keep their possessions.

See those little Lego guys? They were mostly bought by his doting grandpa. One day, a friend came over and mentioned that Lego is so expensive. One small box with one figurine costing $39. I was confused and told her that #5’s set came with 5 of them. She insisted that her son’s set only had one. In the end, we found out the truth from #5 that his gong gong bought him extra figurines but told him to pretend that they all came together. My friend was speechless. So was I.

I use the cupboards in #5’s room to store Kate’s extra craft and toys which I put away on rotation. Her other toys are downstairs in a corner of the living room where she spends most of her time.

The transparent boxes really help to make things easier and I can see at one glance where everything is. When we moved here, I asked the hubs to please, please build more cupboards. Their stuff was spilling all over the house in our previous place as the storage space couldn’t keep up with the number of kids being proliferated.

I like that there’s ample floor space for the kids to play and create. We lugged this rather heavy wooden castle set all the way back from Germany when the hubs and I went away without the kids.

Another thing I requested the hubs to make was more shelving for books. That’s one of my weaknesses. I can’t resist buying books. These are the titles which the kids loved reading.

The colourful number chart was given by a friend who bought it, forgot about it for almost 10 years, and found it still brand new in time to pass down to Kate. Haha. What a lucky girl.

More often than not, #5 is bullying Kate or taking advantage of her (like using her for his nerf gun target practice) but sometimes he’s really good and helps me by reading her bedtime story.

And they usually end up in peals of laughter.

This post is part of Mum in the Making’s Small Spaces series. Click here for a peek into the homes of others with children. 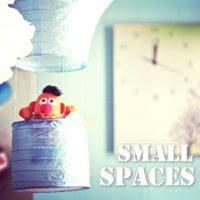 Next up is Yann, from Bubsicles, whose humour in her writing never fails to lift my day. Yann is a mother to two little men who, unfortunately, believe strongly that sleep is for the weak. Therefore, she sleeps too little (for her liking) and drinks too much teh-si. She suffers from Acute Mother Guiltilitis and is also addicted to writing and photography.