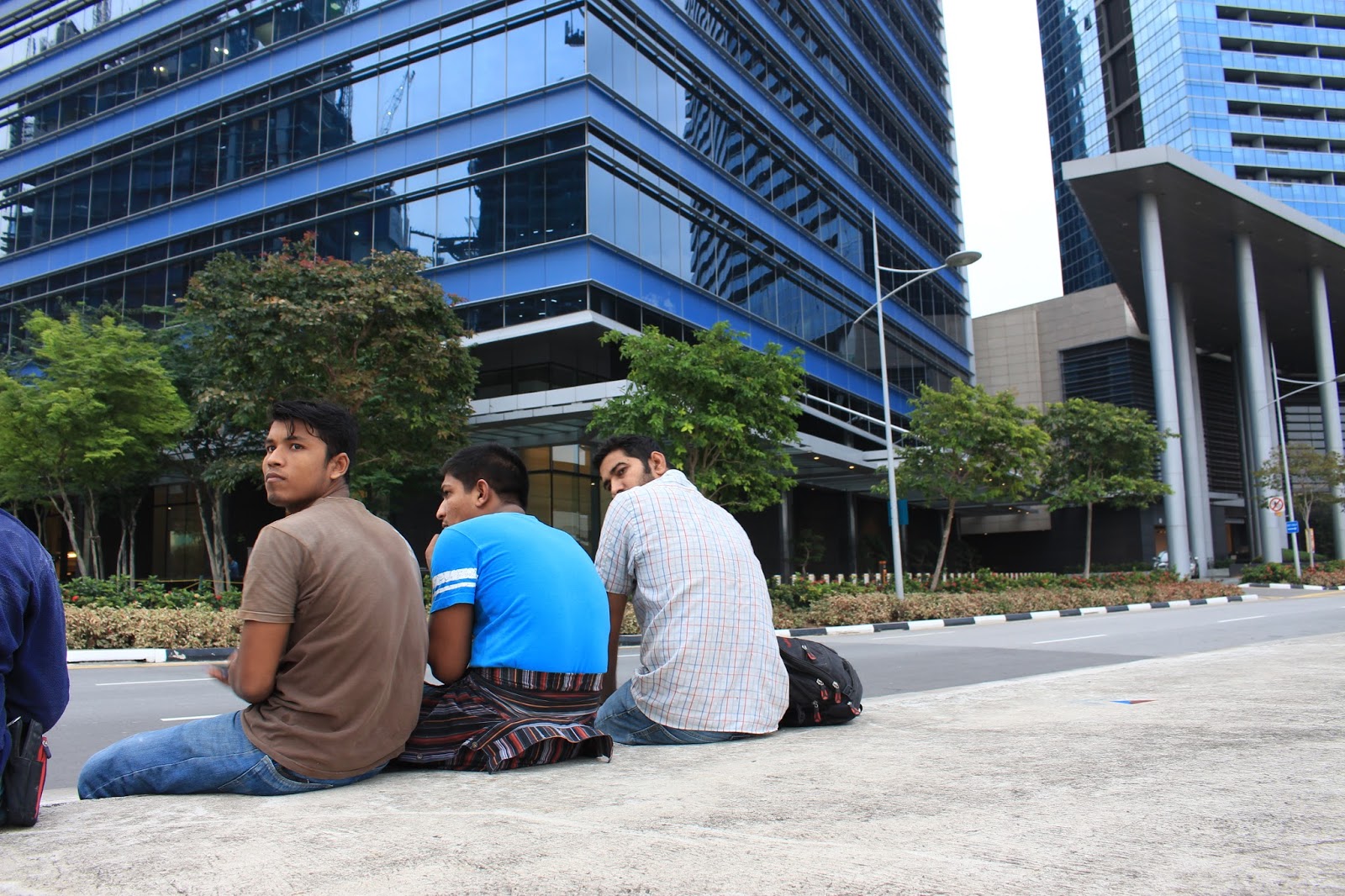 #1 will be voting for the first time and has been following GE2020 closely. At that age, my peers and I were apathetic about politics as it didn’t seem to directly impact us and we took a stable government and the peace and prosperity of our country for granted.

Gen Z, however, seems to be a socially woke generation, hyper aware of social injustice and prejudice. When #1 was 16, she took up photography and ventured out on foot to capture the local streets. She came home disturbed, and showed me her photographs. This scene in particular, stirred up unease in her.

Who are these fellow human beings? She mulled over the fact that it is on the backs of these men’s hard labour that our shiny buildings are constructed, yet they are sitting under the hot sun on the side of the roads they have built for us, with cars zooming past them. They contributed largely to the foundation of our city, but are we treating them with dignity or we simply look away because it makes us uncomfortable? What could she do for them? Invite them home for a meal? Tell their story? Acknowledge them? She gave them a smile, waved and left with a heavy heart.

So what are some of the issues that our youths of today are concerned about?

Earlier this year, they watched in horror as bush fires swept across New South Wales and wildlife perished and became extinct. 2 big questions they couldn’t comprehend: why wasn’t the Australian government doing more? and if climate change was at the root of this and many other problems facing the world, why is the climate crisis not an even higher priority for all governments? They read how some countries are banning single-use plastic, proposing sustainable green recovery packages post-covid, and hope that our leaders are doing their part in minimising the carbon rebound while reviving the economy.

They believe that every individual has to be the solution, and have stopped shopping fast fashion and switched to eco-friendly brands, are against consumerism and buy reusable, sustainable and ethical products where possible.

They are also not afraid to speak up. During her Secondary 4 year, #2 had a session in the hall about environmental issues. Wrapping up, the HOD asked if anyone had anything to say. She stood up and gave an impassioned speech about how it should be everyone’s shared responsibility, that she was confused as her teachers did not walk the talk and the amount of paper churned out by schools was significant and she pointed out scenarios where they could do better. Her teacher shared with me that because of my daughter, she now thinks twice before printing anything and would consider other options first.

The covid situation heightened their environmental awareness and as factories were shut and air travel halted, statistics have emerged about carbon emissions. They discovered that aviation and fast fashion are the two biggest culprits in environmental pollution. They want to rethink our vacations as air travel leaves a huge carbon footprint, and it is better to move to a country for a year or two to study or work and explore that country, instead of flying to a destination just for a week or two.

The tables have turned. They are thinking through big issues which concern their future and getting us to re-evaluate many areas of our lives which we have stopped questioning.

FREEDOM OF SPEECH AND HUMAN RIGHTS

Gen Zs have grown up with a lot more connectivity to the world. #2 used to write fan fiction and made friends with teenagers from around the world and became close friends with a few. With technology, they were privy to each other’s daily lives, homes and classrooms.

They chatted about the differences in their school curriculum and discussed issues such as the LGBT movement. For example, her friend from Canada explained about the controversy surrounding their revised sex education curriculum, with different groups holding different views on gender identity and sexual orientation.

It got them thinking about the laws in their own country. They asked questions like why is Section 377A which was enacted in 1871 still valid and upheld in the 2007 review when people should have freedom of choice? While they understood that we are a conservative Asian society, they questioned the point of it being a criminal act if it is between consenting adults.

They jokingly call our helper “our expat” because they tell me that by definition, an expat is anyone who lives outside their own country. Why should there be double standards and they be termed “foreign workers”? As a family, we do our part to take care of the workers around our street, and my kids would hand them biscuits and cold drinks.

They were proud of their dad when during the circuit breaker, he needed to separate his foreign workers and made the decision to put them up in a small hotel instead of letting them rough it out in temporary holdings. They saw the hubs interact with them and exclaimed, “Dad talks to them nicer than to us! And he treats them so kindly.”

While everyone was forced to figure out how to work from home, my daughter lamented that isn’t it sad for people with a physical disability? These are things that employers could have implemented ages ago, but sidelined. She feels that more needs to be done before we can become a truly inclusive society and a level playing field for all, especially for vulnerable groups.

Once, I took her to the market to take photos as I was writing about markets around Singapore. She was drawn to this sight of an elderly uncle with piles of neatly tied cardboard boxes, and wanted to capture his facial expression, but felt it might be disrespecful.

Methinks she has a flair for photojournalism. Her first publication – Scenes of Singapore as seen through the lens of a 16-year old.

Last weekend, the grandparents came over for dinner, and they had a robust discussion about the coming elections. They wanted to know who their por por and gong gong were voting for.

Their 80 year-old grandma went on to tell them how the government has been pivotal in building Singapore up, that they were born just before WW II, went through war, hardship, poverty, and experienced the transformation right before their eyes. From days of water rationing and eating rice with soya sauce, to having the opportunity to go to school and being able to make a good livelihood by working hard, saving up, and providing their children with an overseas education. “When gong gong was hospitalised, even in the 8-bedder, it was comfortable and the the bill was covered by medisave.”

“Yes, por por, we know the government did a good job for the past many decades, but what about now? When I graduate will I be able to get a good job? The cost of living is one of the highest in the world. And HDBs are so expensive we won’t be able to afford it. What about the foreign worker situation? Inequality? Minimum wage? Global warming?”

Grandma looked at her, confused. I could almost see the generation gap.

Gen Zs are far from being apathetic about social issues, and we as parents need to have open conversations with them, to guide them to hash out discussions in an objective and respectful manner.

It is too easy for them to get swayed by information shared by their peers, and I tell them not to simply accept everything they read or watch, be mindful of things being taken out of context, and to do their own research and look at things from both a micro and macro perspective before making conclusions. Pointing out the faults in systems and other people is not difficult. But to understand the full complexity of the problems, consequences, impact and trade-offs requires greater depth of deliberation.

I emphasis that there are multi facets to any issue, and beyond the elections, the real value of them as vocal citizens is not by being keyboard warriors, but by contributing meaningfully and working together to better Singapore. We tell our staff at work, when you come to us with a problem, please bring along some possible solutions you have brainstormed and we can improve things together.

We need a generation of young adults who are able and willing to stand up and steer Singapore into the future successfully. While it is a positive thing that they are taking an interest in the political scene, it is imperative that we give them a solid foundation of strong values, good character, open-mindedness, maturity and commitment to continue to build up a democratic Singapore, based on truths and sound judgement, not falsehoods, groupthink or rash emotions.

Our young people will soon be a force to reckon with, and their idealism and passion must be directed well.

Michelle Choy is an Occupational Therapist by day and mum of 6 by night. Besides the already very demanding job of managing 5 teenagers and one 7-turning-17 tween, she is also Founder of The Little Executive, a nurturing centre to develop children in areas like resilience and executive function, to survive today’s volatile world. She also makes time to volunteer with children and the elderly in her community.