The kids had such a special treat yesterday. We went for the LEGOLAND Malaysia Water Park media preview. It is in fact the largest LEGOLAND Water Park in the World, and the only one in Asia. It is targeting kids between the ages of 2-12. I took the 4 middle kids along (they are currently aged between 7-13) and they all had a blast! 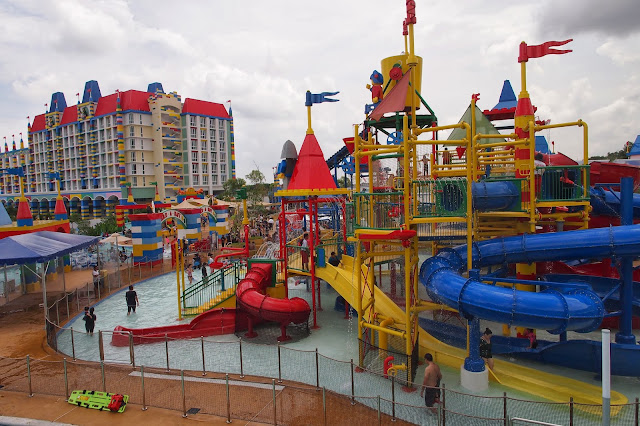 The first thing that greeted us was the Lazy river. It was bright and cheerful with giant Lego blocks floating all around. The kids immediately grabbed their floats and hopped on. As they floated along, they picked up the soft blocks and customized their raft.

Kids under 107cm have to be accompanied by an adult. There are both single and double rafts. It is a really long lazy river so you can just lie back and relax. You enter and exit the river from the same place. The building in the background is the LEGOLAND Hotel which is scheduled to be open early next year. 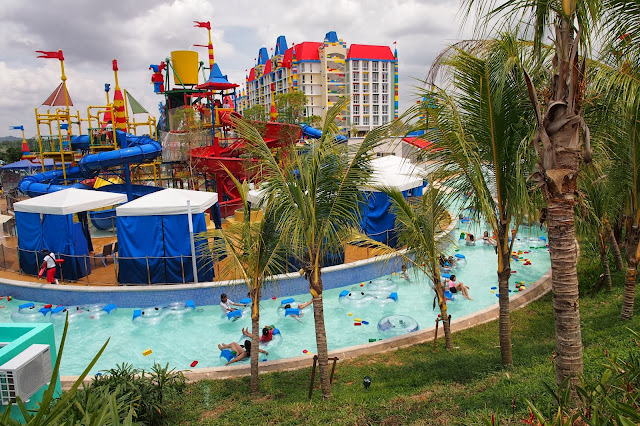 It was lunch time so I told the girls to hit the slides as there were hardly any queues. This was their favourite slide among all as it was thrilling and they could all slide down together. You have to bring a blue mat up and then slide down on your tummy. This slide looks scarier than it really is. #5 was initially afraid to try it but after the girls persuaded him to join them, he loved it and kept on going.

This slide is suitable for the younger kids as it is quite gentle.
There are a few slides where you can slide down together on a tube. There are the 2-seater tubes and also the round tubes which can fit 3 or 4 people.

They found this red and yellow striped slide to be the scariest ride in the whole park. But it was still manageable for #2 and #3, although #5 didn’t dare to ride it.

There are shoe racks at every ride where people placed their slippers, spectacles, t-shirts etc while they went up the ride. Very useful. 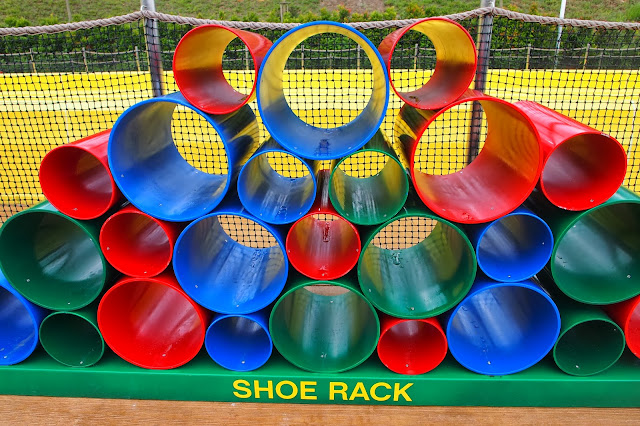 The kids took a break to have lunch at 2.30pm and by then the lunch queues were much shorter. Heard from a lady that they queued for more than an hour to get their food during the lunch hour! There are only 2 F&B outlets. The Beach ‘n’ Brick Grill serves a mix of Asian and Western main meals. It is right next to the Wave Pool. 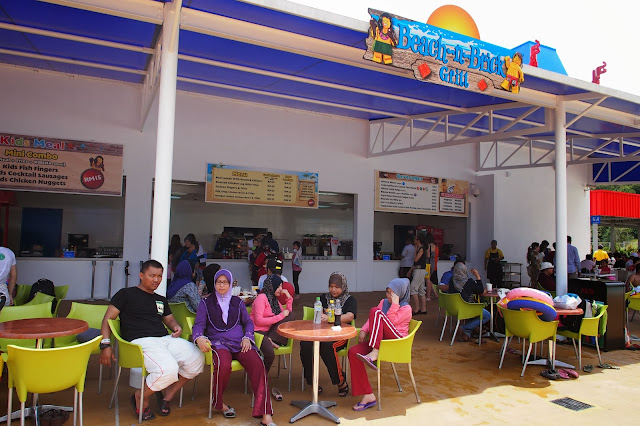 Their sets are priced at RM25 and you have a choice of Nasi Lemak rice (which is not very lemak) with roasted chicken, Roasted chicken leg with fries, Hot dog with fries, Salmon fingers with fries or Burger (chicken or beef) with fries. The sets comes with a cup of cut fruits and a soda (choice of Fanta, sprite, coke, iced-lemon tea, or mineral water). They also have kids meals like sausages or nuggets with fries. 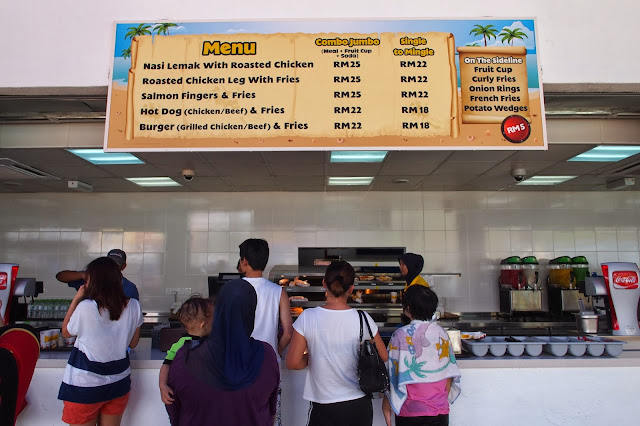 The kids relaxed in the wave pool while I queued for lunch. They found the waves much too mild. It is more suitable for the younger kids. We could take Kate here the next time! 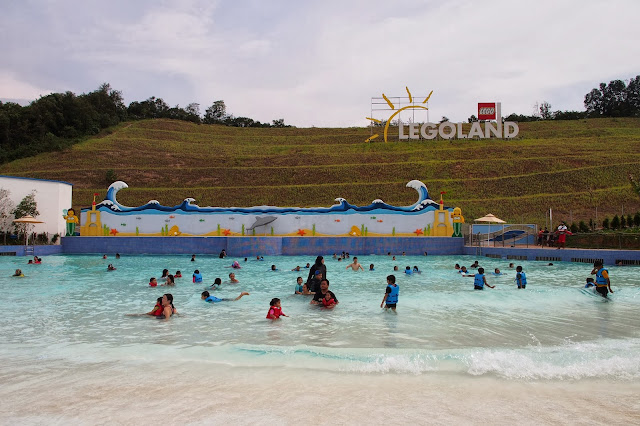 We managed to get a table but during the peak lunch hour, there were not enough tables. The food was decent, enough to fill their hungry tummies! They were more keen on quickly finishing up their lunch to return to the slides.

There are ample seating around the park, but it was hot, hot hot! Wish we had a cabana to ourselves. They are for rent at RM300 per day which comes with towels, some drinks (in a fridge), and a safe. But the best of all, a ceiling fan! I even saw some people having a snooze inside. 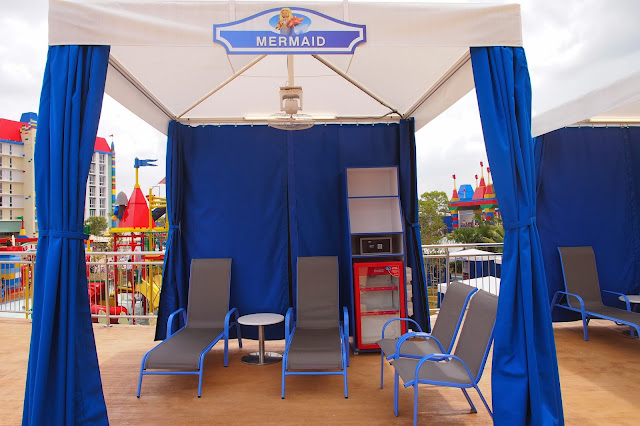 The popular ones were right where the action was, by the wave pool. You can rent them from the Guest services counter at the entrance. Max: 4 pax 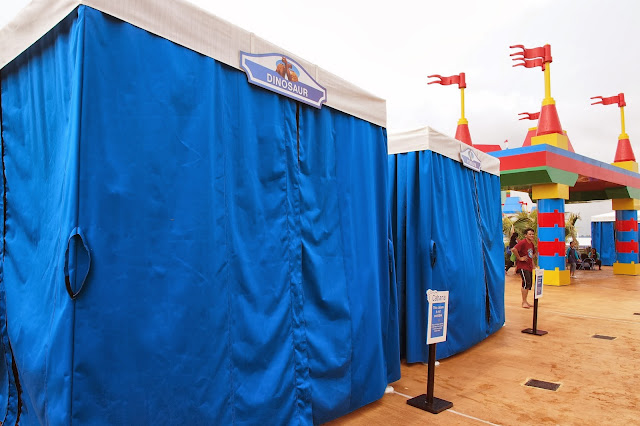 For the toddlers, they have a shallow pool with slides and larger-than-life DUPLO animals. There’s a bit of shade over the shallow pool, which was very thoughtful. 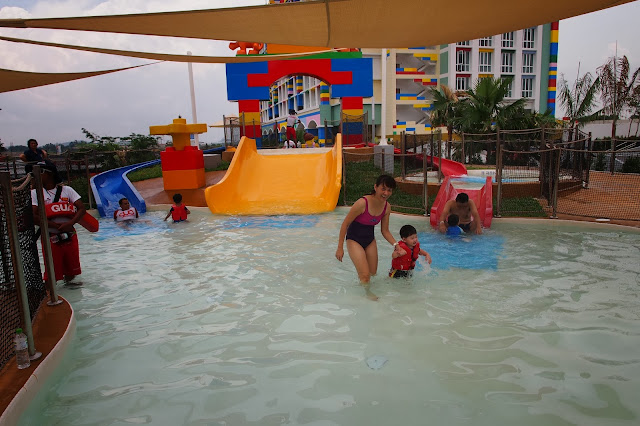 They also have interactive stations where kids can build structures and shoot jets of water at it to make them spin. 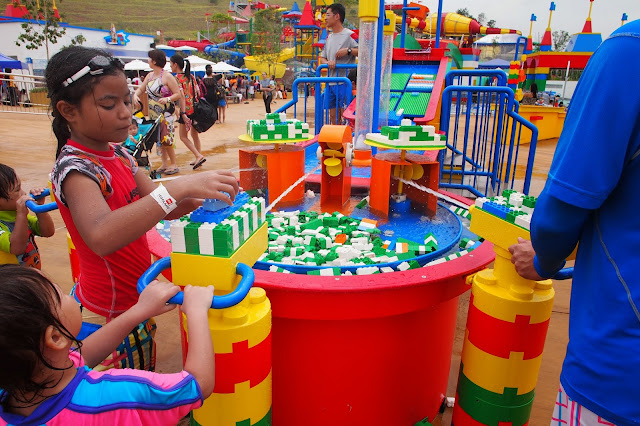 The kids were going to start on the play structure but it started to drizzle and there was lightning so they suspended all play areas. This interactive play structure allows the kids to aim water cannons at one another. And of course, perched right on top is the perennial favourite of the giant water bucket. This bucket is really huge as it pours 350 gallons of water each time!

We decided to grab a snack to wait out the rain. After all that climbing to get to the top of the slides, they were hungry again, so we ordered some sides from the Brick Bay Café. They have Cheesy potato wedges (RM5), Curly fries (RM5), Fried chicken wings (RM15), and hot and cold drinks. They also have sandwich combos for RM25. 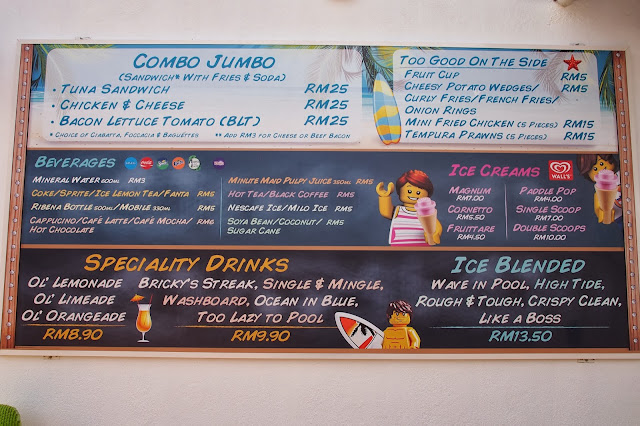 #4 and #5 entertained themselves by building lego structures as it continued to drizzle. The lifeguard was very friendly. He was even helping #4 to hold up her structure as she fixed it, as her base was not stable. 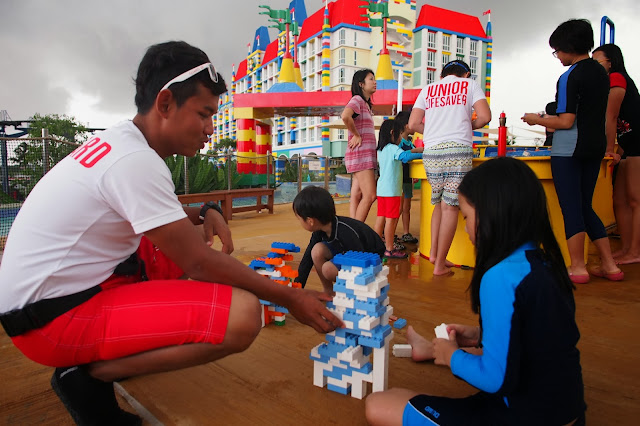 There are lockers for rental at RM20 (small) and RM40 (large) for the whole day. We couldn’t find the shower facilities as there were no clear signs, and after asking the staff, we realised that you have to enter the locker room near the entrance of the park before you can see the shower area. 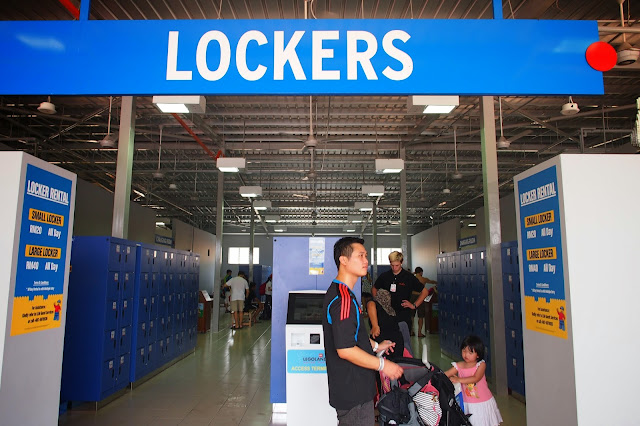 What an awesome day they had! LEGOLAND Water Park will be open to public from tomorrow, 21 October 2013.

Transport
Parking is at RM7 for the whole day.
There is also a coach service from Singapore Flyer which arrives in LEGOLAND in less than an hour. It costs $20 for a return journey. The great thing about taking the coach is that they have a separate lane and you don’t have to be caught in the causeway jam!

Sane tip: Go against the grain. Lunch time is the best time for them to play the slides as the queue is the shortest. Besides, lunch time is the worst time to queue for food.

Save tip: Tickets purchased online at least a week in advanced entitles you to 20%.

Thank you, the kind people behind LEGOLAND for our awesome day out!

~  mummywee – parenting 6 kids in Singapore without going mad or broke  ~