What is she like now? She’s very sociable, and likes to join in our conversations. When we talk, she will babble. When we sing, she will sing. When we stop singing, she will look at us slightly embarrassed and then stop singing too. She likes to wave ‘bye bye’ and will clap her hands when we tell her to. She can say words like ‘jie jie’ and ‘daddy’ quite clearly. I was wondering how come she said those words instead of ‘mummy’ which most babies start with as the ‘m’ sound is easier to make. #3 revealed to me that they have been whispering to her constantly “call jie jie”.

On 2 occasions, she was forced to say ‘milk milk’. Once was when we were going to the supermarket and she saw us getting into the car and she wanted to go. So we took her along (we always do the “grab and go”). Half way through, she started fussing. We kept giving her things to distract her which usually worked. Suddenly she looked at us and cried out in a really desperate tone ‘milk milk’. Then I realised that she hasn’t had her milk since morning. I had a French loaf in the trolley so we fed her a little bit of that and quickly finished up our grocery shopping and headed home. She gulped down a full bottle of milk. 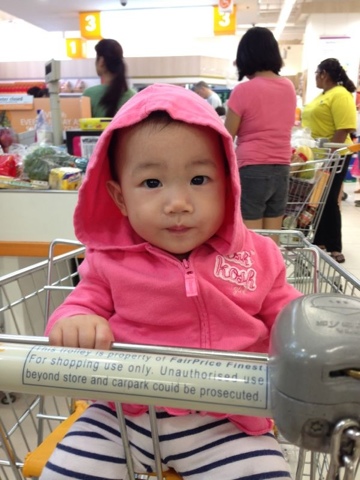 The second time was at night when she was recovering from her illness with the rash. She was fussing so daddy said “ok, bao bao” (meaning ‘carry’) and he cuddled her and tried to soothe her. She kept on fussing and was babbling some words when suddenly I heard her say “milk milk”… ah, ok, we got it.

Her favourite part of the day? Going to the playground!


She will do everything. Sit on the ‘horsey’.. 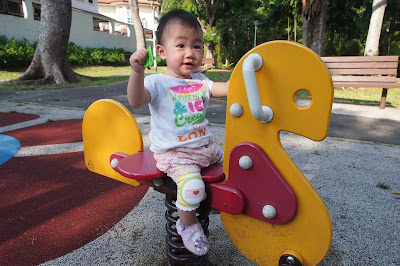 Slide down the slide.. 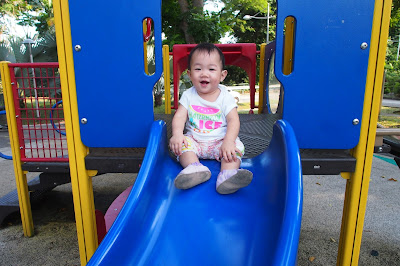 Climb anything she can manage to climb.

Her brother will rock the see saw for her and she enjoys it. I tell him not to rock her so hard but he says, “Look, she likes it!” I think she’s going to grow up to be a dare devil. 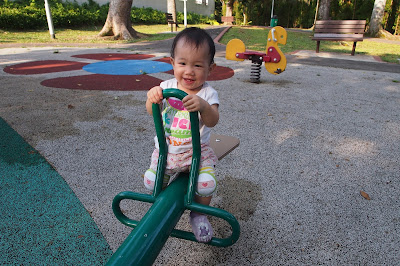 
Sane Tip: From the time she was around 5 or 6 months old, I would take her to the playground all geared up and she would crawl around by herself. She learnt not to fall off the edges and she even learnt how to climb back up the slide by herself. I try to make her independent so that I don’t have to follow behind her every step which is so tiring!

Save Tip: I got her soft shoes from Stride rite outlet at IMM for $19.90. Limited designs, though.