Today the kids celebrated National Day in school, and were released at 10.30am. #3 took opportunity of the early dismissal and had it all planned with her 2 best buddies. I was to take them for pepper lunch, followed by dessert at sogurt, then adjourn to Kidz Amaze indoor playground at Jurong Safra. They get unlimited play till 7pm for $8.25 (that’s the current promotion for weekday, non-school holiday price). I dropped them off at Kidz Amaze and left to settle the other kids.﻿﻿﻿﻿﻿

After Kate had her afternoon nap, I took her, #4 and #5 to Kidz Amaze to join the rest. The main play area is actually not suited for babies under 2 years as there are a lot of older kids there and they tend to be a bit rowdy (admission is for children until age 18).

However, the older ones were so excited to take her on all the slides and since it was not so crowded I agreed to let her go in. She has so far only been on slides at the playground. This was the first time she went on a big slide. She seemed to enjoy it.

Next, they took her to the King of Slides! This 3-storey slide is the highest indoor spiral slide in Asia! It does look intimidating, especially for a 9 month old baby. The kids told me it’s not very fast, but sometimes it makes them a little bit dizzy. I looked at the structure and since it goes round and round, not straight down, I was quite certain she could handle it. And she absolutely loved it! I wouldn’t be surprised if she’s the youngest baby to have tried this slide.

She spent the rest of the time climbing all around the huge play zone. Her siblings had to surround her as there were a lot of other kids scrambling and running about and they might just knock her over or step on her little fingers. 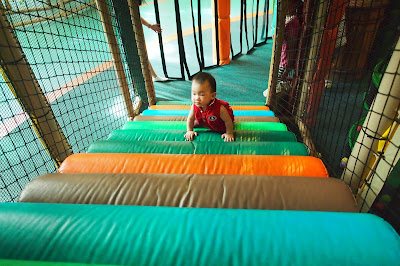 With 5 of them looking after her, I could take a breather and I went over to sit at the café to write this post. If your child doesn’t have any older siblings, why not rope in older cousins or neighbours when you take her out to such fun places? The older kids will be more than happy to babysit and you can have a break!

There is a separate little play area meant for the 0-5 year olds. Although it is a tad small, the good thing is that it’s right by the café so you can keep a close watch on your toddler. 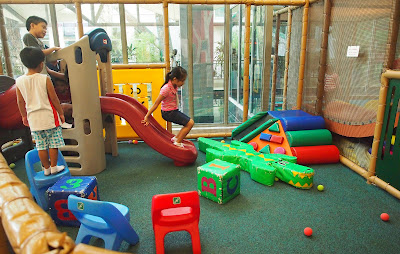 She was there for probably just over an hour but she sure was exhausted. I guess now that she’s tackled this giant indoor playground, my options on places to take her have suddenly widened. I have so far only taken her to Gymboree and SingKids at United square. I can now try the rest of the other indoor playgrounds that have sprouted up in recent years.

Sane tip: I like such indoor playgrounds as the kids can entertain themselves while I chill at the cafe.

Save tip: I always take opportunity of such school ‘free days’ to take them to places which are cheaper on non-peak times. We always inform one another on special promotions going on. Do email me if you know of any and we will spread the word 🙂