Weaning your baby is both an exciting, yet sometimes perplexing time especially for new parents. After going through this with the 5 of them, I realise that every baby is different. Some take to food instantly and love eating. Some take a little more time to get used to new flavours. Be patient. If we are relaxed about it, baby will pick up on it and everything will go more smoothly. There is no point in trying to keep up with what your other friends’ babies are doing and rushing your baby into anything earlier than what she is ready for.

For the 5 of them, I started weaning them at different times, between 4-6 months old, depending on the advice of the paediatrician they were seeing at the moment for their immunisation. Some paediatricians feel that starting at 4 months is fine. Others advice starting closer to 6 months. After reading up on current guidelines, I decided to wait until 6 months before starting Kate on solids. Research shows that it is actually more harmful for babies if you wean them too early when their gastrointestinal system is not developed enough to cope with solid foods.

I think it was #3 whom I weaned at 4 months, and she regressed a few months later and refused to take solids. I subsequently learnt that this is one of the common problems with early weaning. For those moms who are still breastfeeding, there really is no point feeding your baby solids before 6 months of age. Breastmilk is the best and most complete form of food for your baby, so why give them something less nutritious? Unless you feel that your baby is very hungry even after a full feed, or wakes up at night when she was previously sleeping through, or if she is extremely active (crawling everywhere the whole time and burning up a lot of calories) only then should you consider introducing solids earlier than 6 months if you are on total breastmilk.

WHY do we wean babies?

2) To replace their iron stores. Babies are born with enough iron to last the first 6 months. After that, it has to be obtained through fruits and vegetables and fortified cereal (and later through meat).

3) Their taste buds are developing so we have to use this time well to introduce them to as wide a variety of flavours as possible, so that they will not end up being picky eaters.

4) For the first few months of weaning, food is not meant to replace their milk. Offer baby the same amount of milk as always. As you gradually build up the amount of food baby is eating, you can then slowly reduce their milk intake. You should feed baby the solids first before their milk. This is because if you feed them their milk first, they are already full and are not likely to accept the food. They should still be getting most of the needed nutrients from their milk for their first year.

WHAT should we feed baby?

Traditionally, the first weaning food is baby rice cereal. Why is that recommended? Mainly because it is unlikely to cause an allergy. It can also be mixed with either breastmilk or the formula which baby has been drinking, to ease the transition to solids. Furthermore, it is enriched with iron, which baby needs.

However, there are other factors which we should consider, such as nutrition and variety. Are there other foods which are more nutritious, and also not likely to cause an allergy? Remember the window of opportunity I mentioned in 6 Food Rules for babies? What I did for Kate was that I wanted to maximise the variety of foods I could introduce to her in this precious 9 month period, so along with the rice cereal, I started to expose her to a wide variety of fruits and vegetables from the get go. (By the way, I didn’t make all these up. I read some recently published books on the subject just in case things have changed since #5‘s time).

Week 1:
I started her on rice cereal for her first week. I mixed it with a little milk to get the right watery consistency. This was to ease her into solids. For the first week, they only eat about 1 tablespoon each meal, and only once a day. So it was more convenient to just feed her cereal.

Week 2:
I jumped right in to feed her all sorts of fruits and vegetables, which she readily accepted. See the list below “Foods unlikely to cause allergic reactions”. I only used her baby rice cereal to mix with the fruits if it was too runny to get a better consistency, or when I ran out of my homemade puree. I moved on to feeding solids during breakfast and lunch.

Week 3:
Continue to introduce all the foods in the list. Combine them in different ways to expose baby to all sorts of different tastes. Eg. Apple and banana or broccoli and pumpkin.

Week 4:
She started having 3 meals a day (but still very small portions of about 2-4 tablespoons). 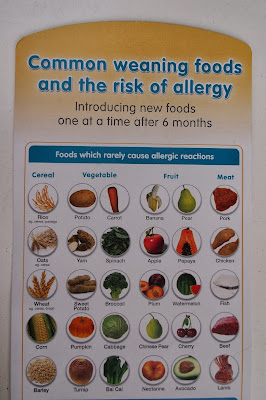 Foods unlikely to cause allergic reactions:

What NOT to feed baby in the first year:

As for egg, there are still different standpoints on whether we should feed it to baby in the first year. Some doctors believe that it is fine to feed baby egg yolk from 6 months old, while others believe it is fine to feed both the egg yolk and egg white from 6 months old. Yet others believe it is better to wait till after the first year to introduce the egg white. However, if you have any family history of food allergies, it is prudent to wait till after the first year to feed it to your baby.
For Kate, I will not feed her egg in her first year as #1 had a serious allergy to eggs. Every time we fed her eggs, she would vomit. However, we didn’t link it to the eggs and we thought it is quite normal for babies to vomit. Finally one day, we were at the supermarket, and she accidentally crushed a raw egg and it splattered onto her face. Her whole face became swollen and we had to rush her to hospital as some got into her throat it almost closed up her airways. Subsequently, she was referred to do a skin prick test and we found out that she was also allergic to shellfish and peanuts. The doctors said that she would outgrow her egg allergy after she reached 7 or 8 years of age. She’s already 15 but hasn’t totally outgrown it. Now, she will not have a serious reaction like vomiting or swelling, but she will break out in rash or eczema when she eats eggs or foods which contain eggs.

HOW to go about it?

2) When you start introducing a new food, do it at breakfast. You don’t want baby with an upset stomach or a rash in the middle of the night.

3) Apply the 2 day rule. Introduce a new food every 2 days so that if there is an allergic reaction, you can easily pin-point which food it was. Keep a diary of the foods your baby is eating, so that in the event of a serious allergy or an intolerance, it will be easier to track. (For the foods in the “Unlikely to cause allergy” list, 2 days is enough as you also want to maximise this window of opportunity to get your baby to accept a wide variety of food).

4) Start with single-ingredient foods, and if there are no allergic reactions, you can move on to combining them for a variation in taste.

5) For the first month, fruits and vegetables should be very well pureed into a thin consistency so that it is more easily swallowed and digested by baby. 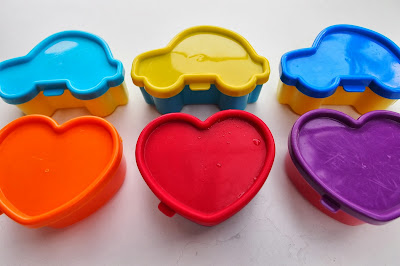 7) If baby does not like eating solid food, don’t let it turn into a struggle. Stop feeding solids for a week or so before you try again.

To go organic or not?
If we could well afford it, why not go organic as it is better for the health of our young babies. But for us, our food bills are high enough as it is, so I only buy organic for foods which have a high pesticide content. (A friend who is a vegetable wholesaler told me that if we were to have a whiff of the chemicals when a box of broccoli imported from China was opened, we wouldn’t dare to feed that to our babies!) I try to buy local produce as much as possible, and it is also not necessary to buy organic for foods which have a thick skin such as bananas, avocado or sweet potato. The United States Department of Agriculture has ranked produce by its pesticide content, so it is best to buy organic varieties of the following if it is within your budget:

Sane tip: We try our best to feed our babies as healthy a diet as possible, but sometimes it’s not easy. There were days when I fed her 3 meals of cereal because I didn’t have time to make her purees. Just do your best, and be kind to yourself when you are tired or stressed out. It’s not the end of the world.

Save tip: It’s much cheaper and healthier to make homemade baby food instead of buying jars of commercial baby food.


To read about an allergy that almost killed #1, click here.