Another terrible thing I used to do was to mete out punishment that was way beyond their crime. We had no consistent rules and their punishment was gauged not so much by their wrong-doings but by our disposition at that point in time.

When they misbehaved, initially I would punish them by taking away their toy or making them stand just outside our main door. I would tell them, “If you don’t want to listen to me, stand out there so I don’t have to see you or hear you. On some days, nothing I tell them worked and they will keep misbehaving, quarrelling over toys or throwing tantrums. By evening, I would be up to my ears and out of desperation, I will warn them, “You do this one more time and I will lock you in the bathroom”.

So when they misbehaved again, I would take the child by the arm and put her in the dark bathroom. I forgot which child it was, but she was extremely afraid of the dark and pleaded with me not to put her in there. I was so angry, shouting at her that I had already given her a warning while dragging her to the bathroom. I closed the door and could hear her wailing inside. She was trying with all her might to open the door from inside but I was holding it tightly shut from outside. All the while, she was screaming and begging me to open the door. Thinking back, I can’t believe how barbaric I was.

At other times, when they disobeyed me, for example, by watching TV for hours when I told them they could only watch for an hour, I would get mad and bark out a ridiculous punishment like “No more TV for a month!”. Which of course will not be enforced, which sends the message to the kids that mummy doesn’t mean what she says, so subsequently they will not abide by my rules because they are just idle threats. And it totally confuses them because they do not know when the rules will be enforced and when they won’t. And to make things worse, we both didn’t agree on the same rules. I would tell them that they can’t watch TV, but a few minutes later, daddy will say “Can watch, but just half an hour.” Poor kids. When clear boundaries are not established, the kids feel confused and insecure and they will keep trying to push the boundaries to see how far they can go. Till today, #5’s teacher tells me that he has behavioural problems and he will keep challenging what she says. Just last week, she told them that since they use their hands to draw, their mouths must be shut and they are not allowed to talk. He took the pencil and put it in his mouth and started drawing, and when she scolded him, he told her that since he can draw with his mouth, he can also use his mouth to talk. I feel so sorry for his teacher to have to deal with him day in, day out.

Now, I try to match the punishment to the misbehaviour and I will lay out the rules first so they know what is coming. For example, if they use their iPads past the specified time, I will confiscate it for a week. And I try to be consistent in the rules, the punishment, and the enforcement. (Still not easy, though). Because it is only when kids try to push the boundaries and know that mummy and daddy will always say no, only then will they grow up to be confident, secure, and happy. 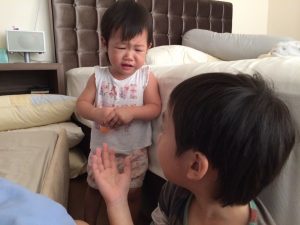 Just because we can punish them in any way we like doesn’t mean we should. Power comes with responsibility and should be executed with justice and compassion.

Other discipline tips (which I’ve learnt after having 6 kids):

Discipline #1: Don’t scream at your child
Discipline #2: Don’t go overboard in your punishment
Discipline #3: Never, ever, tell your child that you will go away
Discipline #4: 6 common sleep mistakes for babies
Discipline #5: How to talk to boys vs girls
Discipline #6: Ban books? What are you gonna do about phones?
Discipline #7: 10 House Rules for Gadget Use

Discipline #8: What do you do when your 2-year old lies?
Discipline #9: When the gramps can’t say ‘no’
Discipline #10: 6 Tips to stop tantrums in toddlers

Discipline #11: Who has the energy to discipline our kids

6 Replies to “Discipline #2: Don’t go overboard in your punishment”