I used to send my 5 older kids to drama classes and like any typical parent, the highlight was watching my little tikes perform on stage. However, they did not seem to be progressing much from one performance to the next. Having evolved into an educator myself, I realised that it was superficial to focus on simply memorising the script and adding in suitable expressions and actions. Thus for Kate, I was searching for something more.

When I chanced upon Centre Stage School of the Arts from an enrichment app colloquially named Today Got Class, what caught my attention was the calibre of the teachers.

“The strength of the school is in its staff. All of the full-time teachers trained primarily as performers and completed courses in UK or Australian drama schools and universities, many have worked and continue to work in the theatre and on television.”

Interest piqued, I checked out their website and was surprised that they have been around since 1999. They have developed into a full creative and performing arts centre offering regular drama, musical theatre, performance acting and dance (ballet, tap, jazz and contemporary) programmes for children – from toddlers to teenagers and even adults. As well as early years play programmes parents can attend along with their tots.

“Creative Drama is the heart and soul of the Centre Stage ethos. It is process driven, rather than performance based drama – the emphasis and the value is in the journey rather than the outcome.”

I was sold. This is the same philosophy we uphold at my enrichment centre, with the focus being the process rather than the product. Skills become internalised and benefits, far-reaching. I could tell that Kate would be in good hands and given a solid foundation in the dramatic arts.

I had a chance to sit in on a session for the purpose of this review and boy, was I impressed. I don’t know how Ms Sophie does this day in day out, but her energy was infectious. I felt like jumping in and being part of the fun! The kids were engaged from the get go, and in that hour, not once did she miss a beat as she moved through the different activities seamlessly. She was firm and had full control of her class, managing to corral even the distracted ones, all while keeping it exciting.

Kate is in Creative Drama Stage 1, and the session opened with the segment News. Ms Sophie asked one by one in a sing-song voice, “Do you have any news for me today?” It sure sounded very grown up. Each of them had something to share, and some brought along an item to show. They waited patiently for their turn, respecting others while they were speaking.

This was quickly followed by Warm up, where they ran through a series of exercises warming up different parts of their bodies.

They launched into an Action song with lots of movement. Clapping of hands, jumping, turning around and Stop! In super speed, no less. This kept the kids on their toes, attentive and listening carefully to the changing instructions.

Next up was the classic childhood game What’s the time Mr Wolf. Ms Sophie reminded the kids to make a scary wolf face and they took turns being the Wolf.

In the Magic segment, the kids used their imagination to act out different scenarios as Ms Sophie magically turned them into various animals. They were pigs rolling around in the mud, cows heading to the water trough, birds flying around and jumping off branches. And BINK! Just as quickly, they were turned back into children in the blink of an eye.

After all that movement, the kids settled down for Story time. Today’s book was Spot goes to the farm. Ms Sophie elaborated on the storyline and asked them open-ended questions such as “What do you think he found?” 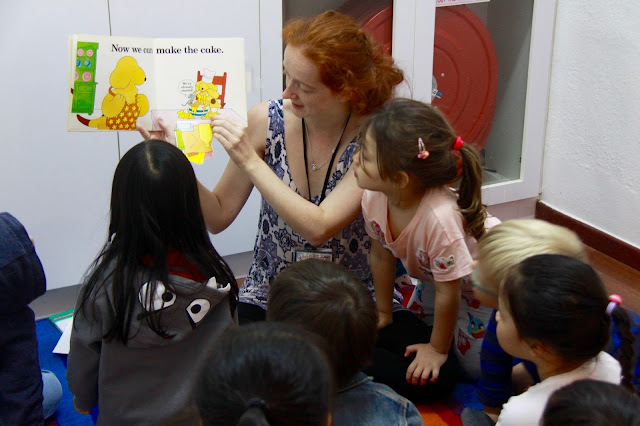 She dimmed the lights and they had to imagine what it was like being in a farm. The lesson culminated in Creative Drama, where they acted out what they had read.

“The children learn through improvised drama, music, mime and movement drawn from favourite books, poems and stories. They start within the safety net of the group and as self-confidence develops, begin to take on individual roles. The students start to acquire the basic skills of drama, the need for clear speech and an expressive voice and body.”

It was a whirlwind of movements as Ms Sophie talked them through their farm adventure. From getting dressed and hopping into the car to finally reaching the farm.

The kids had a chance to meet Farmer Sophie (aka Ms Sophie) and busied themselves with chores around the farm. Collecting eggs from the hen house, cleaning the smelly pigsty, feeding the horses and stroking baby chicks.

Before I knew it, the helpful farm hands were back home, changed into their PJs  and nicely tucked in bed. Phew. I was exhausted just moving around taking pictures of the action.

I can see why Kate loves Ms Sophie’s lessons and look forward to them every week. She has been attending this class since the beginning of the year and feedback from Ms Sophie is that Kate is very participative and contributes good ideas to the group. She is expressive and creative and notices the finer details. For example, when they pretend to get into a car, the rest might just go “zoom zoom!” but she will turn on the engine and put on the seat belt before moving off. Great to hear that she is meticulous in that way.

Indeed, Centre Stage is a top-notch performing arts centre delivering quality programmes for babies right through to adults. Here’s how you can join in the fun!

Today Got Class Exclusive Deals
A package of 5 trial classes from $210 onwards (for new students) – only available when you book with TGC! Classes cover Drama, Dance, Singing and Play groups.

I had a go at using the app to book Kate’s Creative Drama class and it was a breeze. Best of all, you can access it anytime, anywhere.

Out of the Box
If you have a 2 or 3 year old toddler, why not check out Out of the Box, a 90-minute drop-off play based learning environment that aims to bridge the gap between home and full-time school. Sessions include Drama, Dance and Music. Contact them directly for a trial class.

Disclaimer: We were sponsored Kate’s drama lessons. All opinions are my own.
~ www.mummyweeblog.com – a blog on parenting 6 kids in Singapore ~