I applaud the MOE’s move to assign experienced principals to helm heartland schools. My 5 school-going children are in 4 different schools so I can see firsthand how a principal makes a difference. To begin with, I would like to express my heartfelt thanks to the principal of #4 and #5’s school (I will not disclose the school to protect their privacy). She is very approachable, always greeting parents with a smile, and she stands shoulder to shoulder with her teachers (even in the rain) to receive the students when they are dropped off in the mornings. When I stop her to have a quick word about some concerns I have, she is willing to listen and she does follow up with the problem. 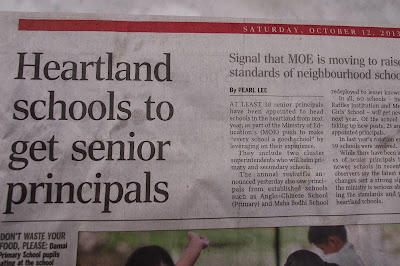 However, to make ‘every school a good school’ I do believe that there are several other factors to consider besides the implementation of niche programs or other hardware. Let me just share with you some scenarios on the ground.

1) A friend’s child could not get into a popular primary school and was posted to a heartland school. She had no qualms about it and was very excited to journey with her child in her education. She decided to get involved and was on the parent support group. However, after 2 years in the school, she was greatly disappointed. In one instance, she asked the teacher why the one and only excursion in that year had to be cancelled and the teacher replied: “Do you know that it costs us $170 to charter a bus there and back? We don’t have that kind of money.” In some CCAs, they did not have adequate funding so they roped in willing parents with some basic skills to teach the children.

When her daughter got into the gifted program, she was transferred to a top school in P4. There, she saw a world of difference. Not only were there many more CCAs to choose from, but they could afford to hire the best coaches for their students. The ratio of coaches to students was much better and the kids could have more attention. There were also more opportunities for excursions and overseas trips. She can now see very clearly why parents are fighting to get into the best schools.

Issue: The allocation of funding should be balanced across the levels and programs so that all students will benefit, instead of having a bulk of the money channelled into niche programs or programs to raise the profile of the school.

2) Another friend shared with me her story. Her eldest son got into a SAP school in P1 and she was quite sure he was in safe hands. She did not give him any tuition, but at P6, she realised too late that the school only taught half, and expected parents to settle the other half of their education out of their own pocket. Her son scored 180 and went to a heartland school. She was fine about it. However, within a few months, she saw her son change drastically. He sat next to a boy whose parents were busy at work the whole day. The boy introduced her son to Lan gaming and he came home at 10pm every day, even during school days. They had so many family quarrels and she couldn’t control her son. She went into depression and had to seek help. She was desperate and heartbroken. Now with her 3rd child, she takes no chances and gives her daughter tuition, hoping that she will get into a much better school than her brother.

I am aware that such negative influences are also present in ‘top’ schools, but the prevalance is lower. I do believe that we as parents have the bulk of the responsibility in instilling the right values and morals in our children so that they would stand firm against negative peer influence. However, which parent wouldn’t prefer to leave their child in a good school environment so that they can have peace of mind while they go to work. I would think that I’m not far off the mark when I say that most parents do think that many heartland schools are good schools when it comes to having good programs and dedicated teachers coming up with innovative teaching methods etc. However, the concern lies in the friends the child is going to mix with.

3) #1 had a best friend in P6. She ended up scoring 240 while her classmate scored 190. They went to different schools. I took them out shortly after they entered Sec 1 and was very sad to hear the stories her friend shared. She was telling us how scary it was in school. She related an incident where they were in class having lessons, and suddenly a Sec 3 boy slammed through the doors and barged into her classroom. He went up to one of her classmate and punched him in the face. Her teacher tried to restrain the boys but the older boy was oblivious to the teacher and went on harassing the other boy, all the while spewing vulgarities. Both of them were then hauled to the disciplinary master. Apparently, the Sec 1 boy had stood on the toilet bowl and looked over to the other boy’s cubicle during recess. Besides such drama which probably petrified the class, there are other daily disruptions to lessons whereby the teacher is constantly wasting time dealing with some disciplinary matter or other.

4) During the final year exams in Sec 1, a friend called up to ask if her daughter could study with my daughter so that she could get some ‘good influence’. She said that her daughter did not want to study as it would seem uncool, and she would be labelled a ‘nerd’. It would take a strong child to stand up to this type of school culture. In comparison, I can see healthy competition going on amongst the students in my daughter’s class where they try to out-beat one another in their exams.

Issue: A student culture that does not promote studying

5) A teacher shared with me that it was a world of a difference coming from a heartland school and being transferred to a ‘top 10′ school. Before, her students never did her homework and she had to go around to the HDB block of flats after school to hunt for her students. She would find them at the playground and have to tell them to go home and do her homework and to revise. She even had to buy alarm clocks and go to her students’ homes and tell the parents to get their children to school on time. In the top school, she was surprised that most of her students already knew what was in the syllabus!

Just a suggestion: In situations like these where parents are too busy working to make ends meet to take charge of their children, perhaps the schools can step in. They could get a mentor program running where they provide rooms in school for these latchkey children and get the students who are doing well academically to mentor the weaker students under the supervision of a teacher. Instead of letting the negative influence prevail, have the other children provide a positive influence to their classmates.

6)In #3’s school, we had a change of principal. This principal was highly acclaimed as she achieved a lot at her previous school. However, having been here for the past 6 years, she has left many parents disappointed on so many aspects. But I’ll just like to highlight one very simple incident. There was a case of HFMD going on in one of the classes (it was a P4 class). No information was provided to any of the parents in that class nor in any of the other P4 classes. Bear in mind that the students shuffle around for their banding subjects. Many days later, my daughter came down with HFMD. I did not even know anything about it until the day she got it. I asked her if any of her other classmates were absent. She told me yes, another 9 of them. I was shocked. I immediately called up the school and voiced my concern and asked what was the protocol for such contagious diseases? I never got a reply from the school, even after leaving an email for the principal. I heard from the parents of the class with the first case of HFMD that it had spread to more than half the class. The parents banded together and went to school to insist on a meeting with the principal. The principal’s stand was that the exams were round the corner and she would not shut down any class. In the end, my younger children caught HFMD. I’m sure many other siblings of those kids caught it too. We as parents could see where the principal’s priorities were, and it definitely was not the student’s or their family’s welfare. But what I was most disappointed in was that the school did not even have the decency to inform parents about it. We would have understood the school’s viewpoint to complete the syllabus and we could have made our own decisions whether to send our children to school or not.

In contrast, in #5’s school, when one of his classmate came down with chickenpox, a doctor was called in immediately and all the students were screened. I had to go in and pick him up from school as he was suspected of having chicken pox. As it turned out, it was just some scratches, but they would rather err on the side of caution.

I could go on and on with other examples, but I think you get the point. If every school could someday really be good schools in all these other aspects, I can safely say that most parents would be comfortable sending their kids to any school. This would really alleviate a lot of the unnecessary competition going on at the PSLE level and a lot of unnecessary parental stress at the P1 registration exercise.

In my post 6 tips to choose a secondary school that is right for your child, I highlighted some very admirable principals who had dared to be different and implemented many out of the box strategies and programs for their students.

I humbly appeal to all principals. You are not the head of a corporation. You are a leader, with the power to inspire and garner the energies of a legion of teachers under your wing. Who in turn have the power to influence and shape the lives of thousands of young people, who will go on to shape our country. Take good care of your teachers, even if it may mean a smaller bonus or less accolades for your school. Lead your teachers with integrity, courage and wisdom. After all, isn’t that what we are trying to teach our children?

I had a cousin who was a principal. Sadly, she has left us. However, till today, when I meet parents who had children from Fairfield Methodist, they still remember her fondly. They tell me she was a principal with a heart. I sincerely hope that as you go about your challenging tasks ahead of you, you do it with a heart.

To read about the Dialogue Session I was invited to at the MOE, click here.

4 Replies to “An open letter to all principals”